In February 2011, Leaves Russell released its debut EP, “A Tale of Two Basements.” The cover art was done by Jeremy Moore and looks like this: 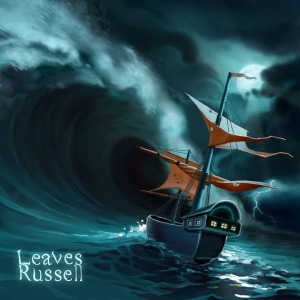 leavesrussell.bandcamp.com for a very reasonable $5.

The five songs on the album are:

5 Replace the Light (Upon the Stand)

The album was engineered and mixed by Brandon Jiaconia and Noah Woodburn at New North Sound, and mastered by Carl Saff. We were the last band to record at New North during the brief time it was located in the funky downtown Portland space that used to be a gay bathhouse, and where long ago the Kingsmen recorded the legendary song “Louie, Louie.”

Here’s what Oregon Music News had to say about it:

Leaves Russell, the melodramatic, Portland, rock four-piece, has a new, five-track EP, Tale of Two Basements, now available for stream and purchase on Bandcamp–pssst, it was engineered at New North Sound, the same downtown space where The Kingsmen put “Louie, Louie” to tape. The cooing, EP-opener “Heart of Things” starts with an off-kilter 31Knots-esque beginning and ends with a stark duel between piano and strings–their recordings feature viola, violin and electric mandolin.

These additions add something more morosely Brit-rock than poppy, Portland indie rock to Leaves Russell’s sound, as vividly heard on track two, “Paperthin,” with the not-quite-soul-wrenching yet emotively anthemic chant of “Turn yourself in” alongside the bona fide power of balladeering that comes with building a six-and-half-minute song:

The fourth cut, “NaNaNa,” begs for a loose sing-along while the guitar sings its own solo.  The band says, “We don’t want anyone to die because they don’t have great music, so we’re offering the songs for free or barter to anyone that emails hearleavesrussell@gmail.com.” Leaves Russell’s next live shows in Portland are scheduled for March.