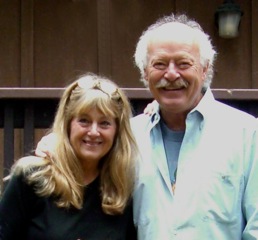 There’s never been a “Schmid Family Band,” but my parents Will and Ann (pictured, at left) are folk singers who have long performed together, and from time to time, I’ve joined them.

My musical roots go back to classical (Western orchestral) and folk music (especially fiddle tunes). Much of this I owe to my dad, Dr. Will Schmid, author of over 50 music books for Hal Leonard and Silver, Burdett & Ginn and other publishers, past president of the Music Educators National Conference and longtime music professor at the University of Wisconsin-Milwaukee.

An equal debt is owed to my mom, Ann Schmid, who organized the Stringalong Weekends folk music workshops for some 25 years. In 2015, she received the “Annual Folk Tradition in the Midwest Lifetime Award” from the Folk Alliance Region Midwest, an award that reflects what the Stringalongs and all her work has meant to folk musicians across the Midwest.

My dad’s focus is his World Music Drumming organization and curriculum, which his website worldmusicdrumming.com says is in “over 20,000 schools worldwide.” 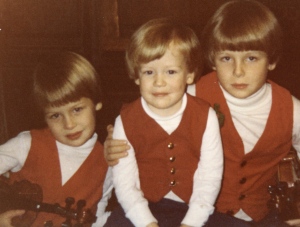 My parents brought me and my brothers up playing violin in orchestras and at folk music workshops, things called “Pickin & Grinnin.” We occasionally, begrudgingly, dressed up in red vests and held violins (pictured, at right).

I still have a long scar on my left (fingering) hand that I got from running across a large conference room at a Pickin’ & Grinnin’ and breaking a window as a very young child. The story my parents tell is that, because we were in rural Wisconsin and it was a weekend night, the only doctor that could be found to stitch my hand back together was called away, somewhat tipsy, from a cocktail party. I can’t open my left hand as far as my right to this day, but like all good scars, it’s a reminder to me of my childhood — and I had many happy times at those Pickin & Grinnins, listening to talented fiddle players like Peter Knupfer, soaking up music that was so different from the classical world I inhabited back in the big cities.