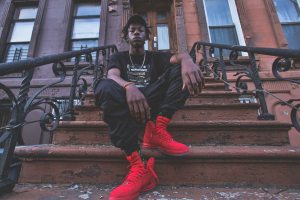 He is the hip-hop golden boy of the moment, surfing the frothy waves of social and mainstream media. He shares selfies of first daughter Malia Obama wearing his Pro Era collective’s T-shirt. He leads anti-police-brutality marches in New York. He gets thrown in an Australian jail for punching a security guard at a music festival.

Joey Bada$$’s lightning-rod persona is not artifice; rather, it’s the natural outgrowth of his music, which the young rapper brings to Portland’s Wonder Ballroom June 19. Bada$$’s sound, rooted in conflict music, comes from a crossroads: a polished, balanced but still funky blend of cultures, generations, continents and emotions.

“I gotcha back, ain’t gotta worry,” he raps on “Curry Chicken.” “Only thing I ask is for some Curry / Chicken when we land we eatin’ dinner / Mama seen me on TV again looking thinner / But I’m lookin’ like a winner, aye.”

Bada$$’s career took off in 2012, when he was just 16, after he dropped a super-successful mixtape, “1999.” Featuring production from heavyweights including DJ Premier, J Dilla, Statik Selektah and MF DOOM, the recording put Bada$$ (born Jo-Vaughn Scott) on the map, with more than 1 million downloads.

“B4.DA.$$” has sold more than 100,000 copies since January, Bada$$’s Pro Era reps said via email. The album debuted in the Top 5 on the Billboard 200, outselling new records from Portland’s own The Decemberists and Marilyn Manson as well as Billboard regulars Nicki Minaj and Lupe Fiasco —  quite a feat for a young, independent hip-hop artist. But even with better-sounding studio production than “1999,” it remains to be seen if “B4.DA.$$” will continue the fast-paced growth of the Bada$$ brand — or just make more money.

“Cash ruined everything around me,” Bada$$ raps on the track “Paper Trail$,” alluding to Wu Tang’s “C.R.E.A.M.” He uses the line to underscore the theme of the new album’s title, an abbreviation for “before the money.”

“They say money is the root of all evil,” he continues, “I see money as the route of all people / Because we all follow paper trails / And everybody got to pay their bills.”

The record finds East Coast producers DJ Premier and Statik Selektah crafting thickly-wrought, thumping grooves that feel at once sparse and claustrophobic. The lyrics Bada$$ layers over them reflect a youthful nihilism consistent with his social media photos, which often feature middle fingers pointed at the camera.

“I can’t see what I can’t relate to,” Bada$$ raps on “Hazeus View,” in which Hazeus is pronounced like Jesús in Spanish.

“Hip-hop is the biggest musical genre in the world,” he boasted in a recent interview with hip-hop radio station Hot 97, ignoring the popularity of rock, pop and country.

In the past, Bada$$ has found a balance between hippie rap and the gangsta stuff. “Instead of lead slugs, I spread the love,” he rapped on mixtape track “95 til Infinity.” But when it comes to police, his take is strident.

“If you see a cop, hit him in his baby back ribs,” he wrote on “No. 99.” His slickly-produced video “Like Me” features images that draw parallels to Michael Brown’s death and other police shootings of young black men; 1.7 million have watched online as officers shoot Bada$$ in the back, after which he rises again, a hip-hop zombie.

High expectations haven’t been the heaviest burden the Brooklyn MC has shouldered. He cancelled a scheduled European tour in late 2014 when his cousin Junior B died in a car crash. And in 2012, Pro Era artist and Bada$$ collaborator Capital Steez committed suicide by jumping off a building on Christmas Eve.

But nothing has held Bada$$ back so far, with the exception a heavy-rotation song that could catapult him toward Jay-Z’s or Kanye’s orbit. Sure, he dropped out of high school, but Bada$$ earned his Hip-Hop Ph.D. Check out his dissertation this week at the Wonder Ballroom.

— Thacher Schmid for The Oregonian/OregonLive