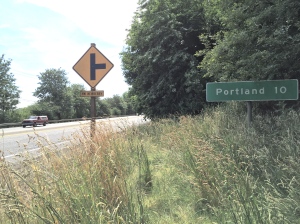 This article appeared in the July 2015 issue of the NW Examiner.

If the Linnton neighborhood is to get its “village,” its “complete community,” as envisioned by its leaders for decades, it will need some help from City Hall.

The Portland Planning & Sustainability Commission is expected to add its stamp to the 2035 Comprehensive Plan draft July 14, and then it will be up to the City Council to consider or reconsider assumptions that the need to preserve “heavy industrial” lands trumps local hopes for revitalizing the neighborhood’s Northwest Front Avenue center, now a sparse scattering of businesses and aging homes.

Linntonites have long coexisted peacefully with heavy industry. But Portland’s annex of the area and 1960 widening of U.S. Highway 30 brought the demolition of half of Linnton’s downtown. Ever since, locals have fought for the city to make good on promises to rebuild Linnton’s core.

Now, despite an uphill battle every bit as steep as the Linnton hillside, and City Council’s nay vote on the Linnton Village Plan in 2006, the issue is again on the Linnton Neighborhood Association agenda.

“Everyone on the neighborhood association and board is in agreement that Linnton wants that to be rezoned,” said LNA President Shawn Looney.

She meant the area bounded by the railroad tracks, the Willamette Greenway corridor, and Northwest 107th and 112th avenues. The strip of stores, restaurants and gas stations between the tracks and Highway 30 is zoned mixed commercial.

City planners are prioritizing “more stringent retention” of prime harbor industrial land, according to Steve Kountz at the Bureau of Planning & Sustainability.

“The intent is partly to retain the unique infrastructure advantages of these areas as Oregon’s freight infrastructure hub and partly to meet 20-year land needs for forecast industrial job growth,” Kountz wrote in an email. 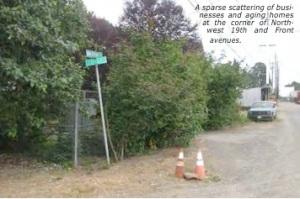 Linnton’s core is changing, zoning codes notwithstanding. Restorcap’s plans to turn the shuttered Linnton Plywood Mill into restored habitat on the south end and a plan to put a community garden in Kingsley Park on the north end suggest heavy industry’s not the only thing the neighborhood is capable of supporting.

Linntonites say the river is too shallow and Front Avenue property too minuscule to interest new heavy industrial companies.

“That property is never going to be industrially developed,” said Edward Jones, past LNA president. “It’s been sitting there for years and nothing’s happened.”

“The reason why the city’s holding so tight to this is there’s a  shortage of industrial land,” said Leslie Lum, a city planner who has met with Linnton residents. “We don’t have enough land. That’s why the conversation is going the way it is.”

That might come as news to Linntonites, considering much of the splinter-shaped neighborhood is almost the exclusive province of heavy industry.

Linnton residents could be forgiven for thinking local leaders don’t much care about this scrappy little community. Despite all Linnton’s history, it does not merit the tiniest of four sizes of circles used to identify neighborhoods, towns, regional and city centers on comprehensive plan maps. Kountz explained that Linnton’s small population disqualifies it for a circle because there are not “3,500 households within a half-mile walking distance.”

“I don’t think they should circle out the oldest community,” said LNA board member Sarah Taylor. “Somebody’s making a lot of money by not putting that circle there. … At this point, if they don’t create a neighborhood hub in Linnton, they’re going to end up with a strip mall from here to St. Helens.”

There are other signs of how regional planners see Linnton. Just past Sauvie Island, a roadside sign sitting on Portland land greets Highway 30 motorists headed downtown with “Portland 10 [miles].”

The implication? You’re not in Portland. You’re 10 miles away in some “drive-through neighborhood,” said Looney.

The iPhone app she uses to look up hazmat signs on tanker cars along the railroad lines in Linnton suggests another apt phrase for Linnton: industrial sanctuary. Priorities expressed by industrial stakeholders in the Working Waterfront Coalition, which helped defeat the Linnton Village Plan in 2005-2006, center on things like “multimodal freight, rail and harbor access” and the safety of local petroleum tank farms.

Diane Niemeyer at Harmer Steel Products Co., an anchor Front Avenue business,  said safety is a reason not to rezone.

“There’s only two ways in and out of here,” Niemeyer said. “If you have a doctor’s appointment and the train’s blocking, you’re stuck, if there are emergency vehicles you’re stuck. You have to wait for 20 to 30 minutes to get out.”

But the city’s comprehensive plan contains language about “equity” and “history,” and it shows a green line for “trails: existing and proposed” down to the river from where Front Avenue and 107th come together by the old mill. River access is a related fight that Linnton leaders have been waging for decades.

“There’s a big vision that we have, and we’re trying to put together a real- ly exciting plan,” Taylor said. “Our hope is that the area above the wetland where the office is could maybe be an environmental education center that could take kids into Forest Park.”

A heavyweight mix of business and government, the Working Waterfront Coalition, appears ready to fight any “exciting plans” for Linnton. Its website doesn’t list its members but links with a Facebook page called “Portland Harbor: Behind the Scenes Tour and Lecture Series.” A phone number on the Facebook page rings Brooke Berglund, community affairs manager for Port of Portland.

The WWC website’s only listed contact is Executive Director Ellen Wax, a former senior planner with the city. A reporter’s email to Wax brought a call from Phil Grillo, a local land-use attorney.

“If there’s any new effort, the WWC would have to know about it, and then we’d have to consider it,” said Grillo, who cited Gunderson, Schnitzer Steel, Kinder Morgan and the Port of Portland as WWC members. “There have been major concerns about [rezoning the Front Avenue area] in the past, and I imagine there will be major concerns about something like that in the future.”

Past LNA President Pat Wagner spoke at a June 23 hearing on the 2035 plan before the Planning and Sustainability Commission.

“If the dream of dreams can come true [in Linnton], and it can,” she said, zoning changes could allow for “maybe a tiny house community” near the restoration of the old plywood mill site.

“Several months ago,” responded Commissioner Chris Smith, “we had the discussion about whether Linnton should be a neighborhood center or not.

“Linnton did not get in any of the [PSC] investment quadrants, and I expressed deep regret because for decades my friends in Linnton [have been] trying to achieve their dream of a complete community, and the fact that it really doesn’t fit our parameters. We hashed that one out, and sadly …” Smith trailed off.