Knowledge may be power, but it’s hardly a sure path to creativity. In music, the more one tries to analyze something, the more it may slip through one’s fingers like a tough chord progression or elusive bebop riff.

Instead of trying to understand music, Esperanza Spalding asks, why not just be curious? Spalding says the heart of her new live show, Emily’s D+Evolution — coming to the Crystal Ballroom on July 28 — is a childish sense of play.

In a phone interview, the four-time Grammy winner and Portland native embodied that same playful energy: She quoted poetry, laughed at some of the questions, laughed at herself, and talked about her new bass ngoni, from Mali. Building on the theme, she read a quote from Henry David Thoreau: “Children, who play life, discern its true law and relations more clearly than men.”

“I love that as a guiding light for this process,” she says, “the abandon of a child or a young person who can actually get to the quick of something that an adult might circle around and analyze.”

Spalding is still guarded about some aspects of Emily’s D+Evolution, declining to “decode” lyrics, maintaining the aura of mystery. But there’s little doubt the Emily persona (Emily is her middle name) has brought twists to her music. She’s playing all new material, and all electric bass guitar — no bossa nova, no “Radio Music Society” songs, no standup. Her quintet weaves together poetry, chanting and theatrical skits, and her stage presence is athletic.

“We’re going to explore that more as time goes on, the theory about how our bodies engage with the music, and what that does to the sound and the coherence of the sound.” 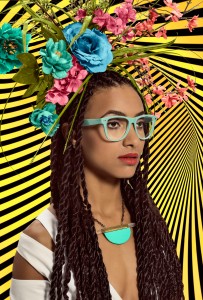 “The kind of braids I have, I think of as antennae that are receiving from the ground. The Afro feels like an antenna that’s reaching up,” Spalding explains.

“This phase of my life is a lot about grounding, getting in touch with my roots and really being comfortable being grounded in something. The weight of the braids on your scalp going down and moving and swinging with this gravity, it can be grounding for my thoughts, reaching for earthy things.”

Those are the big changes, but it’s still Spalding front and center — still the same astonishing bass technique and agile soprano. And If low quality, cell phone video is any measure, Spalding’s knack for song and melody is as strong as ever.

“Nobody’s been walking out and asking for their money back,” Spalding says of the spring leg of the tour. “From our perspective, it takes a lot of love and self witness to be exposed in front of strangers. It’s much easier to figure out a game plan or a spiel that you already know people want to hear.”

Spalding’s working on an album, tentatively slated for a fall release, her media rep says, which makes this tour a traveling laboratory.

The show centralizes the human voice — specifically the pipes of Spalding, Corey King and Nadia Washington — and the sound is lean, a power trio built around Spalding’s bass lines, Matt Stevens on electric guitar and Justin Tyson on drums. Spalding says the group’s been busy “tweaking,” “tightening” and “refreshing” for the summer tour.

Asked about the shift in instrumentation for Emily’s D+Evolution, she insists art can best be understood by looking at the big picture, rather than whether an artist uses crayon, charcoal, oil or spray paint.

“I don’t think it matters what the instrumentation is, it’s more about what we’re saying. I’m not interested in someone’s struggle; I want to know what the fruit of someone’s humanity is.”

Coming back to her hometown should be a big moment, and Spalding gets excited when the subject of Portland comes up. “I love my town,” she says.

“I like the vibe, it’s so unique. If you dropped me off blindfolded in the middle of the city, I would know from the sounds that I was there.”

The scale of Spalding’s talent, and her success thus far, makes it no stretch to consider official recognition of Oregon’s only four-time Grammy winner, or her gorgeous, anthemic song “City of Roses.” The City of Portland has recognized other deserving musical acts, including giving the Decemberists their own day in January.

But Spalding demurs when asked about that possibility.

“Oh no, that’s okay, it’s a waste of energy and municipal funding,” she said. “I think Portland should focus on making the city a better place and a more equal place for its inhabitants.”

Spalding goes on to say that she’s looking forward to returning to the Crystal Ballroom, where she played material from “Radio Music Society” in 2012 and where she used to go swing dancing back in the day.

If one thing becomes clear about Spalding as she discusses the new show, it’s that, like other great musical artists who made sea changes — her friend Prince, Bob Dylan, the Beastie Boys, Ornette Coleman, whose “Shape of Jazz to Come” revolutionized the genre  — Spalding has a restless spirit that won’t stay put.

“There’s some things that you can get to when you’re only doing one thing for a whole lifetime,” she says.

“I have a lot of different things that I want to get to: Composer, poet, instrumentalist.”